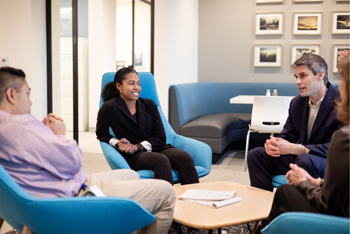 MGKF strives to create a workplace that promotes and embraces diversity in the areas of race, ethnicity, gender, age, mental/physical abilities, and sexual orientation. We believe that an inclusive environment naturally fosters the best talent to produce excellent results for our clients.

The firm is a proud recipient of the 2021 H. Robert Fiebach Award for the Promotion of Women in the Law by The Pennsylvania Bar Association Commission on Women in the Profession.  The award was created in 2017 to honor Pennsylvania law firms and solo practitioners, corporate law departments and other organizations providing legal services that have instituted programs or initiatives that help women lawyers continue and advance in their careers while maintaining a work/life balance.

Law360’s 2020 Glass Ceiling Report found that women make up 37 percent of all attorneys, but just 25 percent of partners nationally.  At the top level of a typical U.S. law firm, women account for only 22 percent of equity partners, but at the time 38.9 percent of the equity partners were female at MGKF, which landed the firm in 8th place for firms with 20-50 attorneys. Currently MGKF’s equity partnership is 50 percent female.

MGKF is a proud member of the Philadelphia Diversity Law Group. Further, to demonstrate our support of diversity initiatives, we have endorsed as a firm policy, the Statement of Diversity Principles adopted by the American Bar Association.

The firm established a Diversity Committee in 2011. The team is comprised of one of the firm's founding partners, the Managing Partner, as well as three other partners (1 male and 2 female). A female partner heads our Hiring Committee, which is committed to implementing proactive steps to reach out to minority candidates, particularly in our recruiting efforts at law schools. Given MGKF’s prominence in the fields of environmental and energy law, MGKF strives to promote diversity for the historically under-represented in these rapidly growing fields.