Law360, Boston (April 17, 2016, 9:43 PM ET) -- While the typical law firm's partnership ranks are still dominated by men, 25 firms have made strides towards greater gender equality in their partnerships, earning them spots on Law360's list of Ceiling Smashers.

Law360's Ceiling Smashers are the top 25 U.S. law firms that have the highest percentage of female partners, including equity and nonequity partners, out of more than 300 law firms surveyed.

These firms partnership ranks run counter to the prevailing trend in the industry, where female partners can seem few and far between. Law360's Glass Ceiling Report found that women make up just 22 percent of partner ranks, despite comprising nearly 44 percent of nonpartner attorneys at the U.S law firms surveyed.

At the top two firms on the list, Walsworth - WFBM LLP and Berry Appleman & Leiden LLP, more than 50 percent of all partners are women. All of the firms nabbing Law360's Ceiling Smashers' top 10 spots have partnerships that are at least 40 percent female.

Like previous Ceiling Smashers, the firms on this year's list tend to be smaller than the firms that make up the Law360 400. Most of the firms have fewer than 100 attorneys, and only Fredrikson & Byron PA and the immigration boutique Fragomen, Del Rey, Bernsen & Loewy LLP have more than 250 attorneys.

Methodology: Law360 surveyed more than 300 U.S. firms, or vereins with a U.S. component, about their overall and female headcount numbers as of Dec. 31, 2015. Only U.S.-based attorneys were included in the survey. Firms are ranked based on their percentage of U.S. partners, both equity and nonequity, that are women. 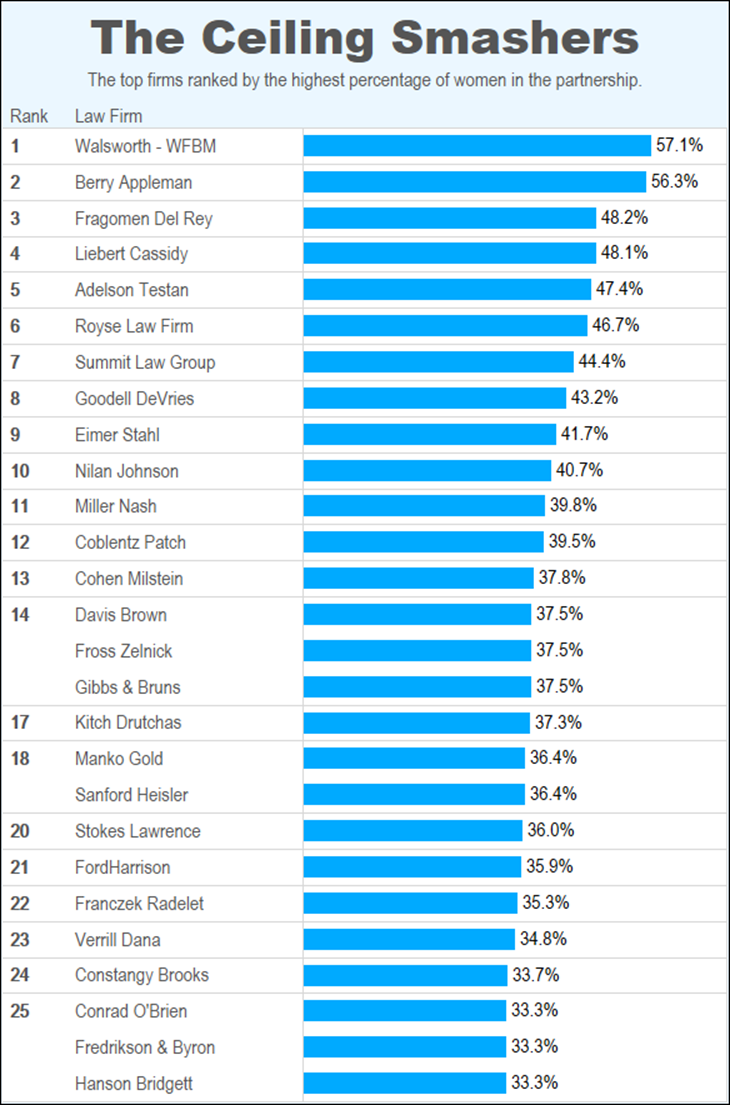